For my lab setup I run a VMWare ESXi 4 server based on a Intel Core 2 Quad setup. The ESXi server software has a relatively light foot print and doesn’t require much space at all for the OS install. Because of this, installing it on a hard drive is usually a waste of space and resources (I/O). My current setup has been booting ESXi off of a 4 GB USB drive. This method does work for the most part, but I have run into a few issues. Sometimes when rebooting my server, it doesn’t always like to boot off of the USB Drive. This can be a real pain when you consider this box doesn’t normally have a monitor hooked up to it. Drives connected through USB should also be mounted internally via motherboard headers to prevent the drive from being removed.

The solution I came up with was to take a Compact Flash Memory Card combined with a CF to SATA Adapter/Enclosure and create my own SSD. To do this, you need a CF Card, I used a 8 GB Kingston Elite Pro X133 ($15 – eBay). Next is the adapter, I’m using a Star Tech 1.8in Micro SATA to CF SSD Enclosure/Adapter ($15 – eBay). Put the two parts together, and you now have a SATA SSD.

Note: The enclosure I am using is Micro SATA(Different from SATA), if you do not have these connectors in your system, you will need a Micro SATA to SATA adapter.

Compact Flash memory is known for its performance and is commonly used in high-end SLR cameras and HD video recorders. Transfer rates range from 20 MB/s to over 60+ MB/s, even the slower speed (x133) is fast enough for this application. Price per GB is also reasonable 8 GB going for about $15 and 32 GB for around $45 at the time of this article.

Putting it to the test…

Installing the home-made SSD also gave me an excuse to upgrade to VMWare ESXi 5. The ESXi install picked the drive right up and installed with no issues. The new drive is noticeably faster than the USB drive method, boot times seem to be considerably quicker. All in all, I think this was an excellent solution. Total cost was less than $35, looks sweet, small, reliable, and fit my needs perfectly. This setup can also be used to house any OS that will fit on it. The server you are viewing this website on is actually running off of this drive right now. 🙂 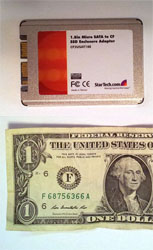 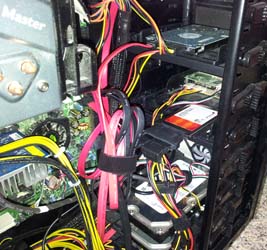