It all started with a single ESXi host…

This whole thing really started with a single custom built pc I made out of a spare motherboard I had. The intention with that box was to run a few virtual machines to play around with Windows Server and IIS 7, maybe even some Linux. One year later, that server was being maxed out and my desktop now being loaded up with VMs as well, which is not what I wanted. So I slowly began this build, hoping to be as cheap as possible while getting the most bang for the buck. Then end goal being a few VMWare ESXi 5 hosts with a good bit of CPU, RAM, Disk I/O and network to run a slew of virtualized hosts from Windows to Linux for production and test/development environments.

My server rack is actually another DIY project of mine, a home made photo-booth. It was perfect 2′ wide by 2′ deep and about 6′ tall with a 20″ Acer monitor already mounted in it. With a few more holes and supports added along with some black spray paint, it made a fine new home for my servers.

To support all of these servers and provide plenty of bandwidth I went all wired gigabit with Cat 6e. The main switch that everything connects to is a 24 port Dell PowerConnect 5324 managed switch which is then connected to a Belkin Gigabit Wirless-N router with a gigabit switch and then the modem. I got the PowerConnect off ebay for $100 and it has been great so far.

The “Cube” – This pc started as a HP Pentium 4 with 1 Gb Ram that my mom had, she threw it out so I grabbed it. I pulled all of the plastic, cut the case, rearranged the components and welded it back together making it the smallest possible size it could be. It serves as a basic console running Windows 7. Total cost – Freeby!

Custom Black Box – This was the original server, built from left over parts and a spare mother board. This server ran ESXi 4 and 5 great, no issues running 4 virtual machines with decent performance. Total cost was less than $300 a few years ago. 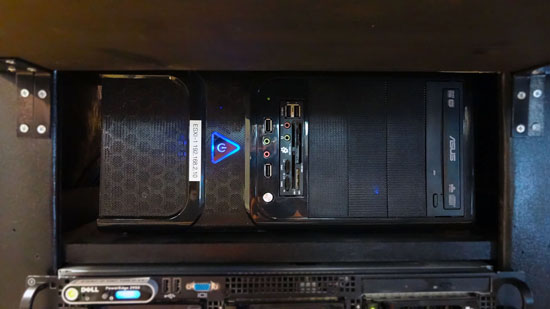 Dell PowerEdge 2950 GII – This was my second server, I took my time picking this one out. This power house is full featured and bullet proof. Right now I’m running 6x VMs on this server with decent performance, only complaint is I wish I had a little more CPU like my CS24. Cost – $350 off of ebay

Dell CS24-SC – This was my most recent purchase, I had a desire for more lab room and this fit the bill. This server is stripped down but packed with CPU and RAM, there are some quirks to it but all in all it is a good reliable server. So far I only have 3 VMs on this server, but this thing is very quick with plenty of room left. Cost on ebay – $200

I did it(for now at least)! This setup seems to fulfill my needs and then some! I have 12+ virtual machines running constantly at this time with plenty of room to provision multiple new virtual machines at any time. I even have an entire Active Directory Domain and a Rendundant/Load Balanced IIS Farm with MySQL Backends just for testing and developing on. Total resources available are 5 Intel Quad Cores (20 Cores Total), 40 Gb of Ram and over 2 Tb space all for less than $1000, that is a considerable amount of computing power for the money. With VMWare or virtualization in general combined with the cheap price of fast hardware anymore the ability to have a functional enterprise style lab is not that far out of reach.