One of the most common questions I get when talking about running servers at home is, how loud is it? So in this video I give a quick demonstration comparing my mild gaming desktop to my home server rack consisting of 6 servers and a “custom” exhaust on the rear of the rack. I tried my best to get decent quality sound and keep everything consistent as possible but picking up high quality fan noise is not the easiest thing to do. 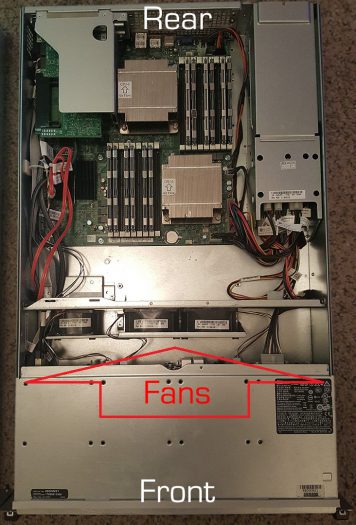 The servers all have fans smaller than 80mm located in the middle of the chassis, so the sound produced is on the higher pitched side but is sort of muffled due to their location. Because of this design the servers aren’t as loud as you would think considering their size, granted you can keep them cool so the fan speed stays low. When the room temperature starts creeping up to 75-78 F though, the servers can get pretty loud.

The desktop’s fans are all configured to run at 100% all the time, so what you hear in the video is the loudest it will ever be. After doing this demo, I would say the 6 servers when on and idling compared to the air cooled desktop are about the same as far as overall loudness. Another thing to keep in mind is when it comes to server sizes a 2U server is generally going to be considerably louder than a 1U server especially when the fans spool up.

You can find more information on the rear exhaust setup in this post.

The quick specs on each setup-