In this video I show off my latest project – Upgrading the cooling system on my home lab in hopes of making it a little more efficient while quieting things down a bit. 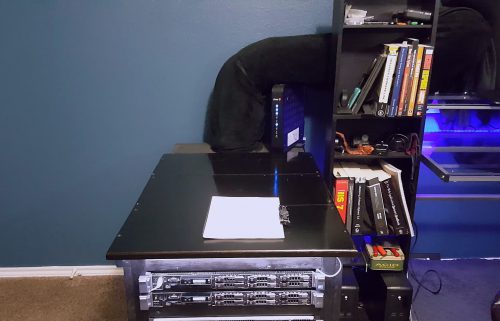 The original setup consisted of the following:
2 x 6″ Ducts with Fans
6″ Flexible Ducting

Originally there was just a single 6″ hole cut into the top of the box and the 6″ fans were mounted at each end of the piping, one on the box and one at the window. 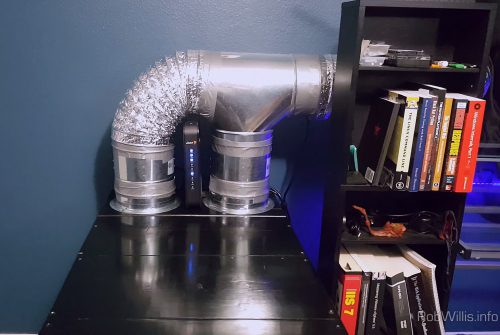 With the new setup there are 2 x 8″ holes in the top of the box and each hole has a fan directly mounted to it. A third fan is mounted on the right side of the T and helps create more negative pressure to help the air flow in the proper direction. All 3 of the fans are tied into the same fan controller so they all run at the same speed.

In the end, I am extremely happy how this project came out! I had planned on being able to pump way more volume out than I actually needed so I could run the fans at lower speeds which would also lower the overall noise level, and that part worked out perfectly. With the big 8″ piping and the dual fans mounted directly above where all of the heat is generated, the hot air is evacuated from the box a lot more efficiently. I also have plenty of overhead for when I start putting more of a load on the servers and generating more heat, all it takes is the turn of a knob to keep the temperatures in line.